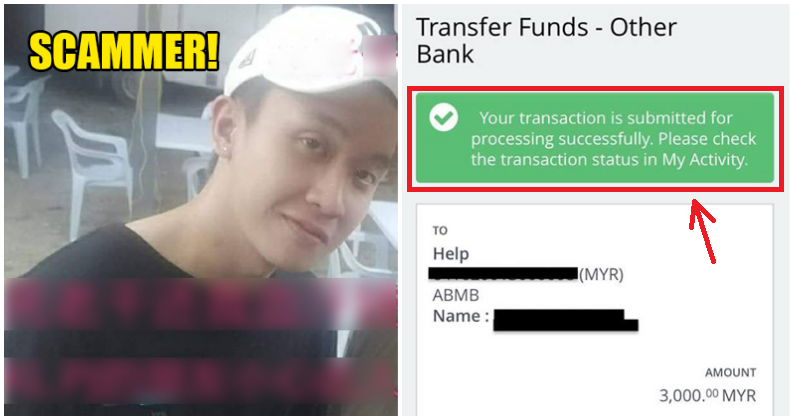 Money scams have become quite a common crime nowadays, and it’s alarming that people are still believing suspicious strangers who ask them for money.

In a Facebook post that was posted on 13 September, a Malaysian shared his experience of how he was scammed of RM3,000 by a fraud who has also successfully scammed a few other people. So beware!

Perumal Jash shares how he was approached by a young man in DC Mall on 15 September who claimed that his ATM card was stuck in an ATM machine. The man said he really needed RM3,000 and promised that he will transfer the money back to Perumal’s bank account on the spot. “He then supposedly made the transfer and shared with me screenshots via Whatsapp,” Perumal said.

“Interestingly enough, the screenshots showed my full name even though I had only given this person my account number and no other information.”

“Unfortunately, I fell for it and believed that an IBG transaction had been done to transfer RM 3,000 to my account. I then stupidly handed over RM 3,000 to this person.” Not surprisingly, Perumal did not find any money transferred to his account after his exchange with the scammer.

He said that he texted the man and asked about the repayment status, but the man kept on saying that there was a problem with his bank account after which he just stopped replying despite Perumal’s constant inquiries.

Perumal said that he made a police report and added that he knows of someone else who also got scammed by the same man. “Please don’t be like me. Stay safe and vigilant. Thanks for reading,” Perumal said. Just don’t give money to strangers no matter how bad you feel for them, guys. They might seem genuine but that’s just their tactic in trying to scam you of your money. Be vigilant!