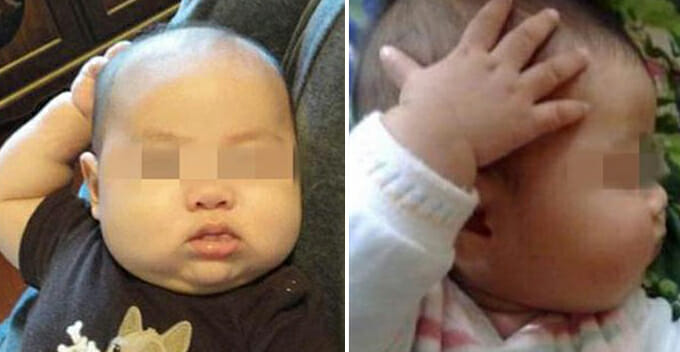 Babies are cute, especially those who are slightly chubs with puffy cheeks. *squish* Every move they make just seems so adorable and melts our heart, but if your baby has been doing this gesture repeatedly, then you should be a little worried and maybe seek medical assistance, just in case.

Recently, a married couple in China noticed that their one-year-old baby named An An, has been touching his head quite frequently. Initially, the parents thought it was just a normal gesture out of pure curiosity. After all, he is only one, so it makes perfect sense for him to want to touch everything. Little explorer!

However, two weeks later, the mother felt that something was amiss. She noticed that An An was still consistently touching his head and his facial expression looked like he was in a lot of pain as the poor baby was frowning simultaneously. Acting on her maternal instinct, the mother knew something was wrong with her baby and thus took him to a paediatrician for a check-up.

After a diagnosis was done, it turns out that An An was suffering from otitis media, a condition where the middle part of the ear suffers from inflammation and infection.

The parents were told that An An’s condition was quite severe as the infection has been going on for a while. The parents then felt guilty as they’ve noticed An An’s call for help but thought it was a normal gesture.

Luckily, the doctor said it wasn’t too late for the baby to receive treatment and that chances of fully recovering was pretty high. Plus, things could’ve been a lot worse had they come to the doctor much later. Many netizens were surprised upon reading this news especially first-time parents, as they’ve never heard of this infection before.

Otitis media is a condition that’s pretty common among babies, toddlers and children. If you have a baby at home, you can keep a lookout for the following symptoms.

We wish An An a speedy recovery and hopefully the condition won’t bug the baby no more!

Also read: Vigilant Lady Spotted Human Trafficker on Bus Before He Could Sell Baby Off