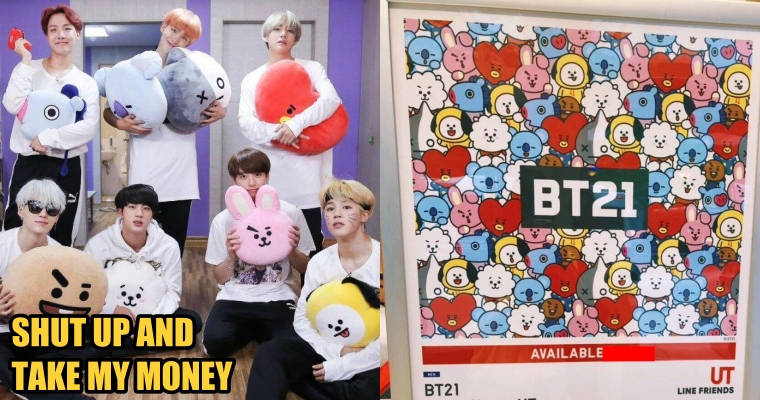 Uniqlo Malaysia has announced that BT21 is collaborating with Uniqlo, and this series of T-shirts will be released globally (yes, including Malaysia)!

Drop everything you’re doing on 21 June and get your hands on these BT21 x Uniqlo shirts! We’re not sure about the reason they decided to release the T-shirts on 21 June, but we’re guessing that this project is done in conjunction with BTS’s 6th anniversary on 13 June 2019 (and also making 21 June a rightful day to purchase BT21 shirts).

It seems like Uniqlo is trying to get us super excited while keeping the designs a secret. Regardless of the designs, ARMYs will most likely flood the Uniqlo outlets. Just take all my money already!

And ARMYs are THRILLED about this release because the official BT21 merch is usually (ahem) pricey. One Malaysian fan has commented on the release, hoping that Uniqlo will release a design with all eight characters included so that they won’t have to spend an enormous amount of money collecting all 8 designs.

Another ARMY hopes that the Malaysian fans would keep their cool while they purchase these shirts, referring to the KAWS x Uniqlo craze that occurred recently. Although we understand that you guys can’t hide your excitement, we can’t help but agree that we all should remain civilised during the release. Don’t stampede the Uniqlo outlets, OK?