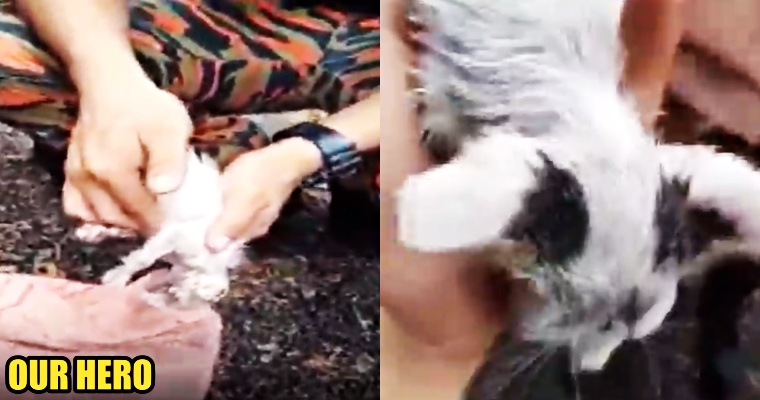 Once again, our abang bomba proved to us that their job scope isn’t limited to just saving humans, but animals as well.

The kitten was said to have drowned in a flood and was trapped inside the roof of a house in Sungai Petani, Kedah. The tide was caused by the recent Lekima typhoon that swept across north Malaysia on 9 August.

In the video, the unfortunate white kitten was not responding at all after it was rescued. This prompted a kind fireman to perform CPR on the unconscious kitten, hoping to give it another chance at life. The Abang bomba flipped the kitten over on his palm and began rubbing its chest and tummy. It didn’t take long until some water came gushing out of its tiny mouth. Miraculously, the kitten started responding by meowing continuously, loud and proud.

He then placed the kitten on a towel on the ground, and just within a minute or two, it started walking around the firemen’s feet! It was only as big as the men’s boots! OMG. The Kedah firemen who were part of the rescue were swooned by this delicate and adorable kitty. TBH, this kitten can melt anyone’s heart!

Big thanks to the Sungai Petani rescue team who rescued this kitten. We have mad respect for the heroes who respect lives that come in all shapes and sizes.

Also read: This Adorable Cat Has a Cute Milk Moustache from Sucking on a Milk Bottle