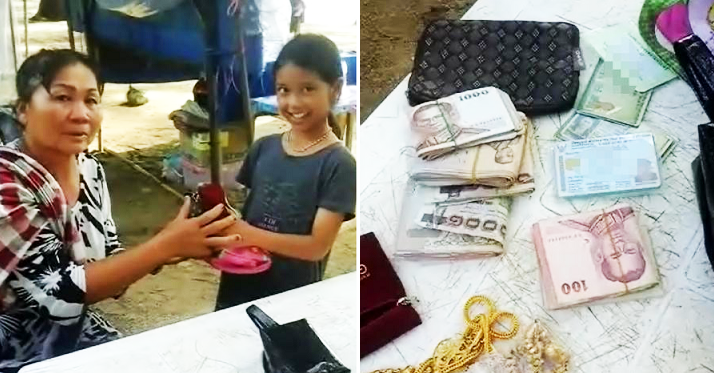 What would you do if you found a whole bag of valuables lying on the road with no owner in sight? I’m sure there are some of us who would not hesitate to pocket it and use it ourselves!

But one little nine-year-old girl from Phuket, Thailand knew that honesty is the best policy so when she found a bag full of money and gold, she did not hesitate to return it to its rightful owner. Not knowing how to return it, she brought it back home to show her parents. According to Phuket Gazette, her parents then tried to find the owner of the bag around Kamala Beach road. “When the rain stopped, I found the bag on the Kamala Beach road and took it to my parents so they could return it. They walked around the beach looking for the owner, and found a beach vendor who was her relative – she contacted Ms Nukhlia,” Piyarat said.

They met at the police station at 2.30pm that day where Piyarat returned the bag to 55-year-old Nukhlia.

Nukhlia said that she took out the large amount of cash from the bank to pay for a hospital bill but when she was making her way home, it started to rain heavily and didn’t realise that her precious bag had fallen on the road. When she reached home and discovered that her bag was missing, she fainted out of shock and dismay.

After she woke up, she tried to look for the bag by backtracking on her route twice but still could not find it. Just as she was at her wits end, Piyarat’s parents called her about her missing bag. She was overjoyed that she could recover her missing valuables.

“When I received the phone call, I was so happy that I cried. I gave her 2,000 baht (RM256) for her act of kindness,” said Nukhlia. Honesty pays after all!

We’re glad this lady managed to recover her money for the hospital bill!