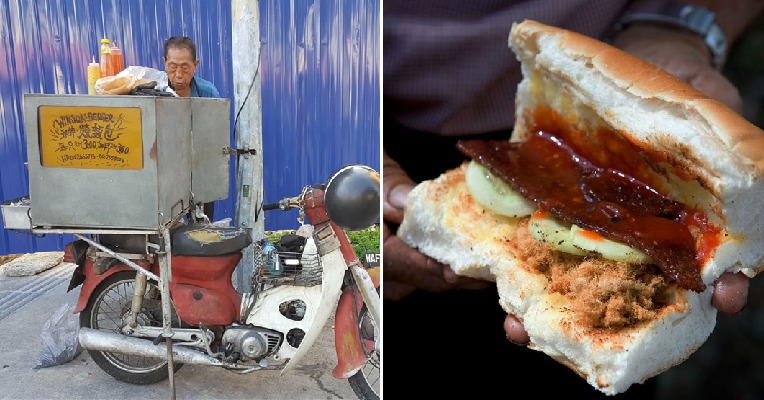 We work for most of our adult life if we’re able and there comes a time when we retire and are able to finally relax. However, there are some people out there who are not able to do so, just like this uncle who’s still selling bak kwa sandwiches at Pudu ICC even though he’s already 80 years old. Based on a Facebook post from Soulusi, the uncle would sell his charcoal toasted bread at the entrance of Pudu ICC no matter rain or shine. He has been doing this for a good many years and apparently, this is what he does to survive. He said, “I’m already 80 years old and I’m alone with no one to take care of me. I don’t want anything, just hope that I can stay healthy so that I can take care of myself.”

The uncle drives a motorcycle to sell his bak kwa sandwiches and there’s a sign with the words “Winson Berger” written on it. Although he may be old, his movements are quite fast as he prepares the bread and ingredients to be made into a sandwich for his customers. He has been selling these bak kwa sandwiches for more than 40 years and at 80 years old, he’s finding it difficult to stand for long. He explained that he used to work as a construction worker, which was why his legs were not very good. However, he persists in selling the sandwiches as he has no one to rely on even though he’s so old.

“I am single with no wife and kids, my parents have passed away a long time ago. I have lost contact with my siblings and now, I live in a rented room nearby,” he added. He says he earns less than RM1 for each sandwich which he sells at RM3, but he is grateful that he still has a chance to earn an honest living. Uncle usually sells about 30 to 50 sandwiches a day and he says that’s enough for him to yum cha sometimes. “I know I don’t earn a lot but I can still survive. I earn the money myself and I use it on my own, as there’s no one else with me. It’s a small business but I feel that it is better like this at least I have some freedom still.”

Netizens were touched by uncle’s perseverance to earn an honest living and said that they wanted to look for him to buy his bread. Some of them recognised him as he had previously been selling his sandwiches at Pasar Imbi but moved to Pudu ICC and praised his sandwiches saying that they were cheap and tasted really good.

If you’re around the area then you can head over to uncle’s motorbike and help him out by buying his awesome sandwiches! Stay healthy, uncle!