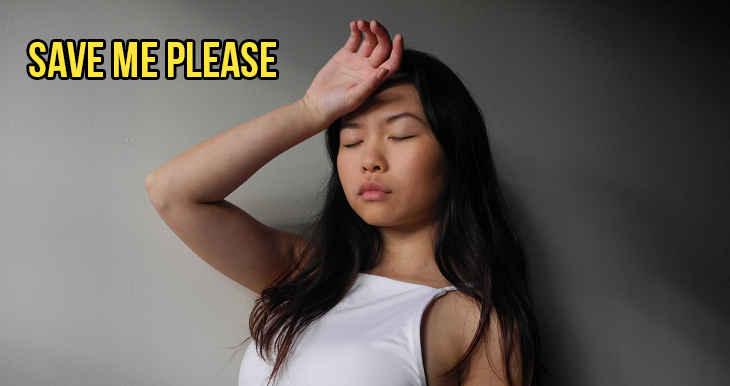 1. Who told you to dress like that? You’re just asking for it!

It’s so insensitive when people say things like that. The repercussions are serious! Imagine if you carelessly said it to someone who was a sexual assault victim. It’s time we learn how to be more careful with our words guys!

2. You put on so much makeup and dress so nice, going to see a boy is it?

Cannot look good for myself one ah?!

Honestly, this mentality has to change. Men can’t appreciate our few hundred Ringgit foundation, primer, highlighter and more so what makes you think we’re out here trying so hard to impress them. Most of all, most men are always preaching on and on about how they like women who wear little to no makeup so truly, it’s not about or for them.

3. You so cranky for what? Period ah?

Or maybe you’re just being really annoying, rude and insensitive…

It’s not always about the monthly torture God had decided to install for the female species! Sometimes, we just wake up from the wrong side of the bed or have had a really sh*t day, so stop adding salt to the wound and be more sensitive towards other people’s feelings.

Can’t hear your bulls*t through all this munching, let me be happy and well fed than sad and starving!

Stop the fat shaming! As long as we’re not dangerously obese, don’t call us fat or ugly just because we don’t look like Victoria Secret models. It’s time to learn to love all shapes and sizes because genetics can’t be helped and appetites are best not suppressed, it’s unhealthy!

B*tch, you just insulted me in front of me…

OMG, when someone thinks it’s funny to go on and on about the embarrassing things you’ve done in front of a group of friends… Honestly, it stops being a joke once you cross the line. Learn about other people’s boundaries for the love of life!

6. You getting tan leh, stop going in the sun so much! Skin dark already not nice

I like my tan and I didn’t ask for your racist opinion!

How rude! We live in a multiracial country and I believe all skin colours from the palest to the tannest is beautiful. Stop perceiving tan or dark skin as ugly, most people don’t realise they’re being racist for this, so it’s time to educate yourselves!

7. You party and drink so much for what? You’re a girl leh!

Because I can and I want to…

No one said alcohol was only for men so why do you have to tell a woman off when she drinks. Moreover, what’s the big deal about going out for parties and having fun? Don’t be sexist, let’s all just lighten up and have a good time!

8. Girls who swear are so unattractive!

What did you *bleep* say? Can’t hear your *bleep* bullsh*t through all my fluent swearing!

Personally, I think what you say and how you react to situations is part of a characteristic. Hence, if swearing is your thing then by all means knock yourself out. If it’s your way of expressing yourself then why stop because some people just can’t understand or accept it. Life’s not always about pleasing others, so don’t expect to always be please as well.