As Typhoon Hagibis continues to rage on in Japan, rescue efforts have been made by the Japanese emergency services to ensure that those who are living in affected areas of the country are evacuated as soon as possible. This comes after death toll from the typhoon has already reached 35 people, according to Channel News Asia. 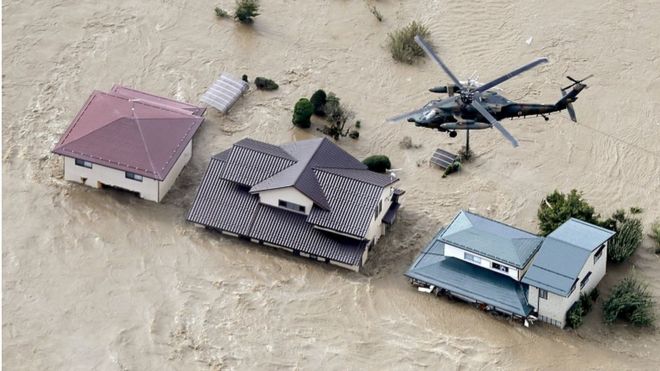 One such causality however, passed away not due to the typhoon’s brazen and wild destruction, but rather, during rescue efforts that were being undertaken by The Tokyo Fire Department. In a horrific incident that was reported by NHK News, a 77-year-old woman fell to her death as she was being airlifted to safety on a helicopter. The case happened in Iwaki City of the Fukushima Prefecture, which had been struck by the devastating effects of the typhoon. Helicopters dispatched to search the city for survivors found the woman stranded and quickly lowered a harness to hoist her up to the helicopter.

With the woman held up by the harness, rescuers in the helicopter then began the nerve-wracking process of pulling her up from the water. But the unthinkable happened; when the woman had almost reached the helicopter, the harness appeared to tilt over, sending the 77-year-old woman tumbling from a height of 40 meters down into the water!

It was later reported that the woman unfortunately passed away from the terrifying incident.

The Tokyo Fire Department has since issued an apology over the woman’s death according to Abema Times, saying that the fall was caused by the harness not being properly secured.

We would like to extend our deepest condolences to the family of the woman who passed away, and hope that conditions in Japan will improve.