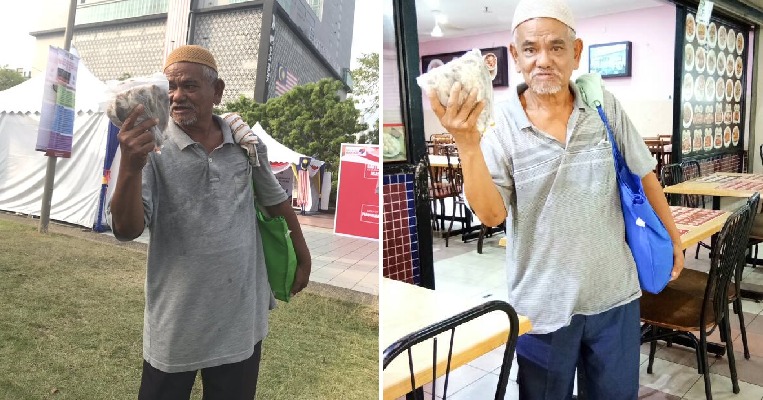 If you have been to Melaka, you might have seen this old man selling salted fish before. Every day, the 64-year-old Md Zin Ahmad from Bukit Pasir, Muar willingly travels 100km to and fro so he can earn some money to support his sick wife. A tweet from a Malaysian girl went viral recently, when she posted about the man walking around trying to get people to buy his wares. She said that she wanted to help the man and posted his picture, hoping that people who saw him can help out by buying his salted fish. She had come across the man when she was participating in a marathon near Dataran Pahlawan.

This senior citizen actually went viral last year, when Berita Harian interviewed him and he shared his sad story. Apparently, he would leave his house from 8am onwards to catch the bus to Melaka so that he can support both himself and his sick wife. He would take along about 100 packets of salted fish to be sold in Melaka, which is his source of income. He has four adult children but insists on selling salted fish as he doesn’t want to be a burden to them, seeing as they have their own families to support as well. He doesn’t mind as his 73-year-old wife, Fatimah Md Said, is sick at home and he needs to support her.

Md Zin reportedly sells his salted fish at RM10 for three packs and based on the tweet, he has been selling his wares for more than five years, as some netizens said that they had seen him doing so in 2012. They even commented that his salted fish is really delicious! He doesn’t stay in one place either, as he walks around several spots to make sure that he sells all his salted fish. Although Md Zin has diabetes and high blood pressure, he said that this is not a problem as he has medication to control his illness. Many netizens sympathised with the uncle’s plight and gave him their prayers and blessings, with some of them saying that whenever they encountered the old man, they would buy from him and give him a few ringgit extra as well.

We should always help others out who are in need!