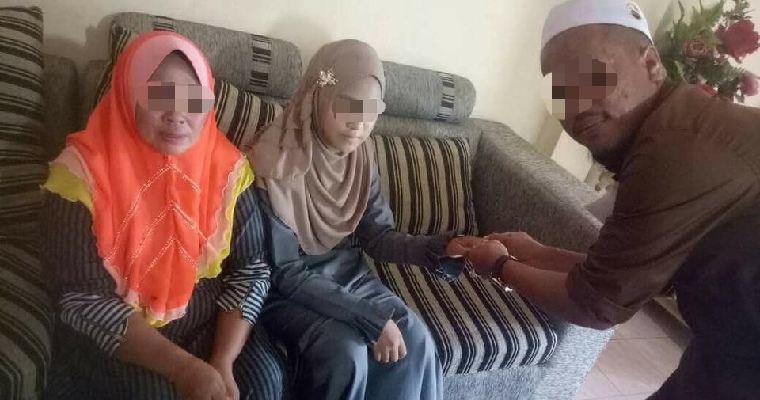 A lot of Malaysians were shocked and angry after discovering a recent post by a wife congratulating her husband who has taken an 11-year-old girl as his third wife.

Yes, take a moment to digest that. Now, have a seat and let’s go through the details together, thanks to Syed Azmi, who has taken the initiative to bring more light to the issue. At first, they were shocked that the first two wives supported the husband but after some investigating, the whole story was made clear. It was discovered that the 41 year old Malaysian had started his relationship with the girl whose nationality is still a mystery, back in March of this year, the post said. The man is also well respected in the community and is an imam. Her parents who gave consent to this union, are rubber tappers who do business with the man. In the circulated photos, it shows the girl sitting with her mother, who obviously supports this marriage.

Both of them tied the knot early June in Thailand without the knowledge of his other two wives. Initially after being confronted without any proof by his wives, he denied it and claimed it would be stupid of him to marry a child. Yet, that’s exactly what he did! The first wife only got her hands on some evidence of the marriage, a few days ago, after receiving the marriage pictures. The man later disappeared and has cut off all communications with his two wives when he realised that the truth was out. His children also found out and it was discovered that his new wife was actually one of his children’s friends!

Syed Azmi said that they have to face many issues with the main one being that the girl is only 11 years old and they feared that her rights would not be protected. Although she seems to be aware of her decision to marry the 41-year-old man, she is vulnerable and might be exploited by irresponsible parties. The rights of a child and her future offspring needs to be protected as well. In the Islam Family Enactment, the minimum age to get married for a man is 18 years old while for a woman it is 16 years old. If the man is under the age of 18 and the woman under the age of 16, they will only be allowed to get married with the allowance from the court and agreement from the parents. Her parents might have agreed to it but the fact that they got married in Thailand means they did not get approval from the Syariah court. Hence, their marriage might very well be illegal here. Both wives did not consent to the marriage as well.

The majority of Malaysians have expressed their emotions towards this issue and they were not happy about it.

As of this morning (30th June 2018) the case has been reported to the JKM Gua Musang and they have sent three officers to investigate the issue.

What are your thoughts on this marriage? Is this really love or has the girl been manipulated into this union against her own will?

Also read: Girl Stops Her Own Child Marriage at 13, Inspires Others to Do the Same