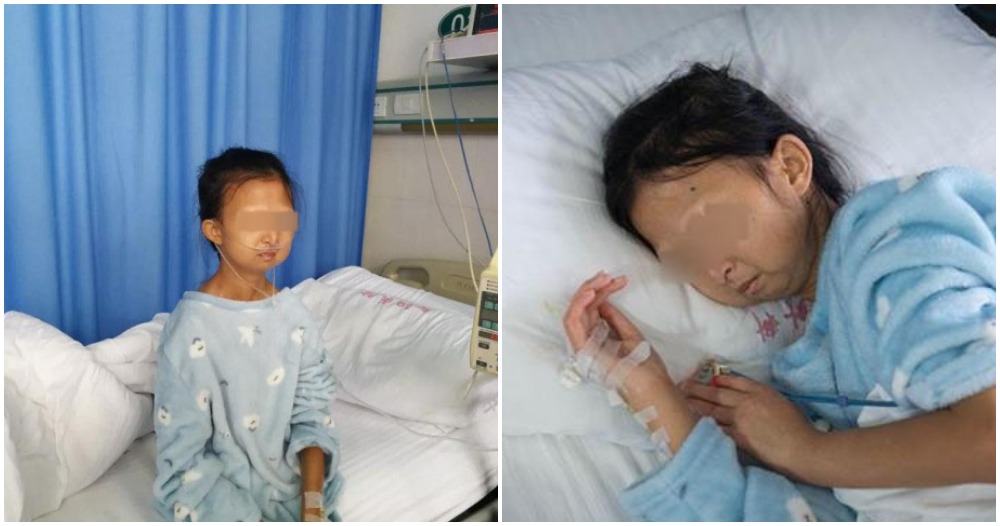 Do you still remember the heartbreaking story of this 24-year-old underweight girl who spent RM1.20 a day on her food so her brother could afford medical treatment? Sadly, the girl has passed away due to sickness. According to HK01, the 24-year-old Chinese girl, Wu Huayan was a third year economics student in a university in Guizhou. Her mother died when Wu was 4 years old while her father died in 2014 due to cirrhosis, leaving both Wu and her brother orphaned. Wu had to take on the heavy burden of caring for her brother all by herself.

They had to live with only 1,290 yuan (RM760) every month. In order to cut down their living expenditures, she willingly sacrificed her breakfast and ate bread or rice with chilli sauce for her lunch and dinner so she could limit her spending of only 2 yuan (RM1.20) per day. Her unhealthy diet had caused malnutrition, which resulted in loss of hair and eyebrows, lowered immunity system and swollen legs with pustules. She was only weighed 21kg and 135cm tall. However, she couldn’t afford the expensive medical bill to treat her condition and resorted to cheap medicine for herself.

As her health was declining, she could barely walk 40m and her face was pale. Under advice from her friends and family, Wu finally consulted a doctor to have her health condition checked. Wu was found to have severe health conditions with 3 damaged valves in her heart. She needed 200,000 yuan (RM118,000) for her medical expenses but she refused to undergo medical treatment. Her friends and relatives couldn’t bear the sight of Wu’s sufferings and told Wu to start a crowdfund for her medical fee. After she posted her situation on a website, she received donations from many people and one of them even donated half of their monthly salary for her medical fee. She was very touched by the charity of strangers even though these kind people did not know Wu in person.

However, she was not able to undergo surgery because her was weighed less than 30kg, and she passed away on 13th January 2020, reported by Sin Chew. Before she left the world, she hoped that she could continue with her studies and earn a living with her own two hands, and lastly to celebrate Chinese New Year with her brother once she recovered from her illness.

We should really appreciate what we have because there are many people living in hardships and misfortune that nobody wants. May she rest in peace.

Also read: 24yo Girl Weighs 21kg As She Only Spent RM1.20 On Food to Save Money for Brother’s Illness