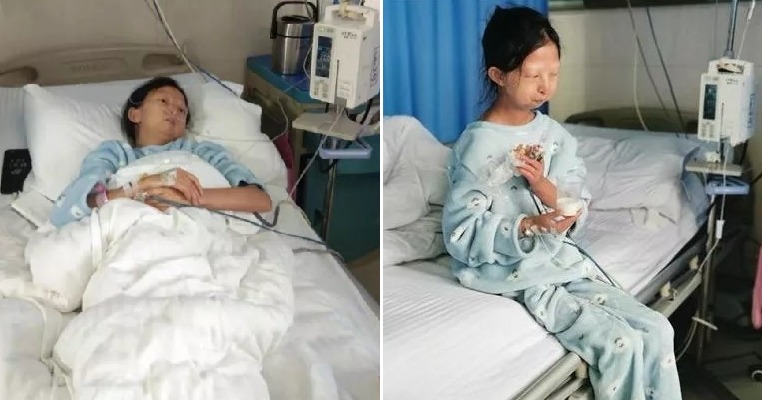 This is so sad! How much would you be willing to sacrifice for your family members? A 24-year-old girl and her younger brother in China were left orphaned after her parents died when they were young, and they had to fend for themselves. They had no income as their mother died when the girl, Wu Huayuan was only four years old, and their father died in 2014 from cirrhosis. According to HK01, Wu had to shoulder the family burden after her father passed away and the siblings had to survive on only 1,290 yuan (RM765) a month. In order to save money, she would not eat breakfast and only ate bread for lunch and dinner or even just white rice with chilli sauce as she limited herself to spending 2 yuan (RM1.20) a day on her food.

She did this because her younger brother had a mental illness, and she needed to save money for his treatment. Her relatives were also poor and even though she was already 24 years old, she looked like a child as she was severely malnourished. Wu only weighed 21kg and was 135cm tall, was losing her hair and had no eyebrows as her skinny body did not have enough nutrition. She would fall sick frequently but did not want to spend money on treating herself, so she would only buy cheap medicine as she had to raise 5,000 yuan (RM2,964) for her brother’s treatment. Luckily, after one year of treatment, her brother’s mental illness was controlled. Although she was poor, Wu did not give up on her dreams and was highly ambitious.

She managed to get a student loan to study at a university in Guizhou and was currently in her third year studying economics. However, the loan was not enough to cover her expenses, and she worked two jobs to earn more money; as a cleaner and teaching assistant where she was paid 600 yuan (RM355) every month. Wu’s plight was finally highlighted when her health went from bad to worse as she found it difficult to even walk 40 metres, and she was admitted to the hospital. The doctors said that she had heart problems due to her severe malnutrition and would require surgery to fix it but it would cost her 200,000 yuan (RM118,580).

Wu refused to undergo surgery as she did not have the money but her friends and relatives were determined that she should do it to save her life. They started a crowdfunding effort for her and her case went viral, with many donating money to help Wu. She was grateful for the help and her brother was determined to do his part as well. He said that he would find social work and earn money to help his sister with the medical fees.

While we are complaining about life, there are so many others who are less fortunate than us. We should step back and count our blessings before it’s too late. Hopefully, Wu will get well soon and live a healthy life!