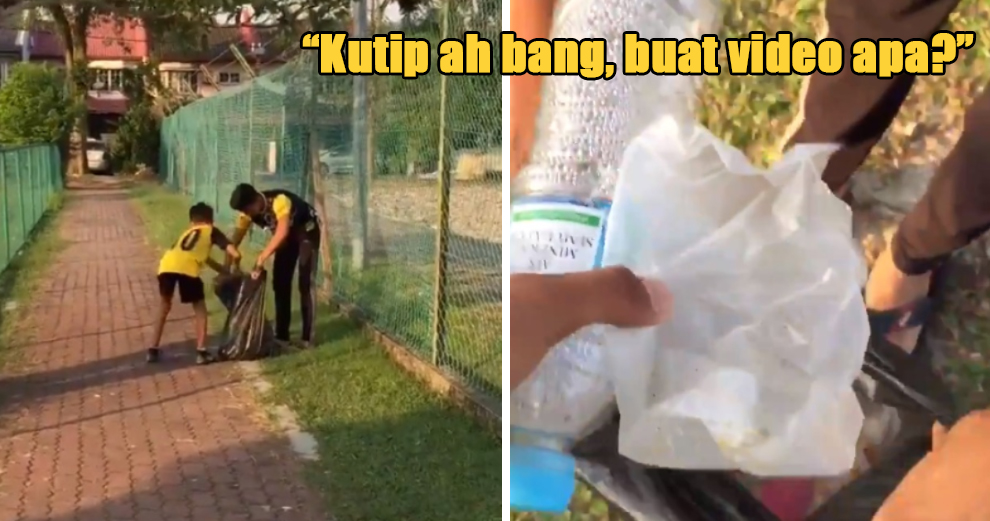 Malaysians celebrate Merdeka in all kinds of ways. Some party all night long in anticipation of a long weekend. Some may sleep all day, others may take it as an opportunity to have a little family time together. This Standard 6 boy however decided the best way to celebrate Merdeka was to give back to the community in the simplest and most touching way possible – by cleaning up the public park near his home.

Twitter user Megat (@megathazeqqq) uploaded a video around 6.30pm on Merdeka Day (that’s 31st August 2019, in case you needed a reminder – which we hope you don’t!) of his brothers cleaning up their neighbourhood public park by picking up bottles and other plastics that had been littered. His two brothers carried a big black plastic bag between them, and were busy clearing the walkway while Megat took a video of them.

His little brother, Megat Azeem, can be heard scolding his elder brother as he takes the video, saying,

“Brother, pick up the trash. What are you taking a video for?”

What a sassy kid!

Megat obliges his little brother, noting that the big plastic bag they brought with them is almost full at that point. The video ends there, but it looks like the siblings cleaned up most of the park, as another Twitter user noted that it was very clean when he took a walk there that night! The location of the park itself wasn’t confirmed, but according to the comments, it’s located in Taman Tun Dr Ismail.

The tweet has since gone viral, with over 2,000 retweets at the time of writing. Megat also mentioned in the thread that his brother is taking his UPSR exams this year, and asked netizens to pray for his success.

We definitely will, Megat! Thanks for restoring our faith in humanity with a little gesture that really means the world to the rest of us. As Malaysians, we can definitely do more to take care of our environment, so take Megat Azeem’s advice – put down that phone and start cleaning up!